How does one write a spoiler-free review of a movie that IS its twists? I don’t think it’s a spoiler to reveal that this is more than just a missing person movie. Ben Affleck plays Nick Dunne, a down-on-his-luck magazine journalist and Rosamund Pike plays his eponymous, doting wife Amy. What looks like an ideal marriage is revealed to have cracks aplenty. And then Amy disappears and the shit hits the fan.

Dogged by the media for his unusually cold reaction to the news his wife is missing and always under the watchful eye of the police who are trying to piece together Amy’s movements on The Day, Nick takes us, as an audience, on a roller-coaster ride unlike anything you will expect. Did he kill Amy, as the Fox News-alike media seem to want? Or is something more sinister occurring? Obsessive ex-boyfriends, wronged acquaintances and unfortunate homeless men all come under suspicion in this taught thriller. 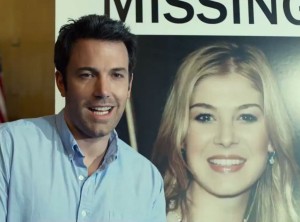 Directed by David Fincher (Se7en, The Social Network) Gone Girl is more than just a movie. It’s an examination of marriage, of truth and lies, of what it means to find the one for you. It’s a wonderful film based on a (I’m told – I’m reading it at the moment) wonderful book. Each beat of the movie feels like the turn of a page – another piece of the puzzle with every line of dialogue and every lingering frame; a lot of this movie’s truth happens by looks alone, mainly due to the steamroller cast.

There’s so, so much more I want to say but even the most pedestrian aspects of the plot are so tightly wound with the crescendo final act (which kind of happens in the middle[?] You’ll see what I mean when you watch it!) that mentioning too much would lay clues before you prematurely. You could do a lot worse than to go and see this movie. It’s fantastic!