The “Original ABBA Musical” is an ambitious show. Wordy, complex and incredibly taxing, vocally. In 2008, Marti Pello, Idina Menzel, Josh Groban, Kerry Ellis and countless other talented individuals performed Chess in concert at the Royal Albert Hall and it is clearly difficult even for them. And they’re, like, really good and experienced and stuff. So when Newport Operatic Society announced they would be putting on Chess you’d be forgiven for thinking “ooh, that could be… interesting!” I’m sure the members of this great society would freely admit that it was a risk themselves. Well, it seems the risk paid off. Bringing such a massive show to the stage as an amateur production is brave. Newport Operatic Society’s production wasn’t without its developmental hiccups, but you wouldn’t have known by watching them perform.

By Benny and Bjorn (of ABBA) and Tim Rice, the musical tells the story of two Chess grandmasters – current World Champ, American Freddie Trumper, his challenger Anatoly Sergievsky of the Soviet Union – and Florence Vassey, the woman who manages one and falls in love with the other. Set against the backdrop of the Cold War, these people are used as pawns, by friends and enemies alike, in a political game that is every bit as relevant in today’s political climate as it was when the show was conceived in the mid ’80s. 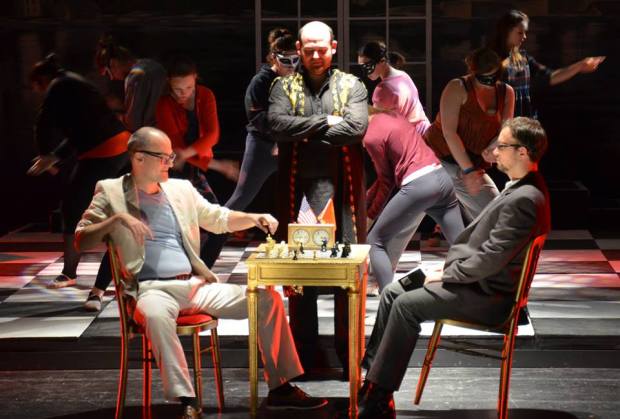 I was lucky enough to catch Newport Operatic Society’s final night at the Dolman last night and left the theatre feeling energised. The staging was beautiful – most of the stage taken up by a massive chess board on which much of the action takes place. And what action! Lucy Phillips as Florence shone; her ‘Mountain Duet’ with Kevin Myers’ Anatoly was – for me – the highlight of the night. I love the song and the pair brought so much emotion to it that I was left with a tear in my eye, much like when Abbey Waters’ Svetlana silenced the room with the most beautiful ‘Someone Else’s Story’.

But enough of that emotional stuff (*wipes tear from eye at memories*), what of the excitement and energy? Well, Ian Eadon-Davies brought that in spades as his Freddie effortlessly treated the audience to a West-End-standard rendition of ‘What A Scene! What A Joy!’ and turned the heat up (with a little help from some sizzling moves from the Chorus and Dancers) with a blistering ‘One Night In Bangkok’. Throw into the mix a calculating performance from Wayne Vincent as de Courcey and a real oozing sinister manipulative masterclass from John Davies as Molokov and you’ve got one great, heavy, hearty show. Top that off with a no-nonsense, balls-out (not literally) performance as The Arbiter from Tony Beard (thanks for sharing your wine) and you have a show that is nothing short of spectacular.

There were one or two missed cues, a couple of fumbled lines but no more than you’d expect from even the most experienced cast on the last night of a four-night run, especially considering the complexity of Chess, lyrically. Seriously, just try to sing along to ‘Press Conference’ without skipping a word. It’s impossible! Yet, somehow, this cast appeared to do more or less that. Having spent a little time with them recently photographing their final rehearsals I think it’s fair to to say that the show has grown and grown, beyond even the Society’s expectations. What began as an impossible task became the crowning achievement of a Society that has been performing, in one form or another, since the early ’20s. I sadly haven’t seen any of the previous shows Newport Operatic Society have put on but rest assured I will be first with a ticket for each and every show to follow. You guys have a new fan.

Battling an (overly?) ambitious choice of show, the loss of cast members and production staff along the way, drama, tantrums, difficult choices and a deadline that seemed to be racing toward them faster than time should allow, Newport Operatic Society have, in my opinion, proved two things: Firstly, that there’s now nothing they can’t do. And secondly, that not even the most vocal, negatively minded nay-sayers can quell their juggernaut-force dedication and commitment.

Am I allowed to say, as someone who has been given a window into their always exciting and incredibly talented Society, that I am very, very proud of each and every member of the cast, production team, chorus, band, dancers and the committee behind them all for what has been a wonderful, unquestionably successful feat? Well, I’m saying it!

Newport Operatic Society’s Chess is something I’ll never forget seeing. A true triumph, not just against the odds, but in its own right.