So apparently this is a thing now. Apparently it has been for a couple of years. Like “National Boob Day” or “National Talk Like A Pirate Day” I assumed it was made up by idiots. Apparently not. It seems it’s all about Save The Children (the charity which gave Child-Murderer War Criminal Tony Blair a Best Bloke Ever award) who want to “make the world better with a sweater”.

Sure, I’ll take that. I won’t give to Save The Children but my workplace are raising money for numerous other charities today with our “wear an embarrassing, unwashable jumper to work day”. I’ll be wearing my “puddie” (pictured below) and paying £2 for the privilege. But, I’m afraid this is where I go all Scrooge on yo’ ass. Here, have that photo of me in a Christmas Pudding Hoodie before I kick off: 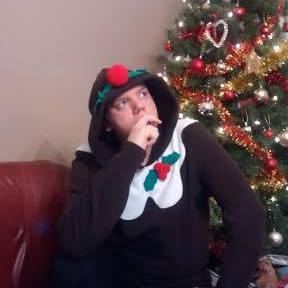 I have an issue with people who “like” Christmas jumpers. That sounds really grumpy, I know, but I do. I hear people, every day, say something like “look at this one, it’s so funny” or “awwww! It has a penguin on it! That’s hilarious!” But it isn’t, is it? That’s not funny. Dave Allen was funny, Stewart Lee is funny, some people even think The Big Bang Theory is funny (it’s not) but a jumper with a penguin on is not funny. It just isn’t! Those jumpers that have some awful pun on them – Jingle My Bells, or something – they could be classed as “so bad it’s funny”, but just having a penguin on it doesn’t make a jumper funny.

Also, what the hell is the deal with all the lights and music? A jumper with Rudolph on the front, and his nose lights up; that works. That’s okay. But a snowman with a light-up carrot makes no sense. There’s a jumper on the market which has a complex fibre optic “burning festive fireplace” design on it and that’s quite good (despite the fact that you’re carrying so much wiring and tech beneath your vest that you’d best not travel by air wearing it or else you’ll likely be shot in the head as a would-be bomber). But shoving lights everywhere is pointless. I know, they’re novelties, but they ain’t cheap!

Even the most basic Christmas jumpers from the cheapest of stores will set you back the best part of a tenner. And you can’t wash them! Oh, no! Not the ones with lights in them! You wear them once, drunkenly dribble gravy down your front and that’s that. You’re done. But don’t worry! Sponge it off as best you can! You’ll be buying a new one next year anyway, because heaven forbid you get caught wearing the same Christmas jumper two years in a row!

PROMO: £2 from the sale of every £12 Christmas Jumper at Primark has gone to the Make A Wish Foundation all this week – so get them while you can: today’s the last day! For all my bluster, it’s a nice thing to do and – today – you’ll look the twat if you AREN’T wearing a silly jumper, so… Go on. It’s Christmas!