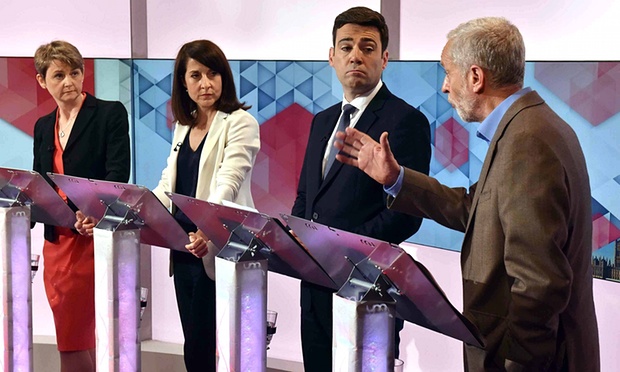 Strange things are happening now the Labour leadership contenders are finally stood in the blocks – yes, voting is almost upon us and it’s making a difference to the way in which the candidates are conducting their campaigns. Well, most of them, anyway…

Yvette Cooper is trying her best to pass herself off as “radical” because she wants to expand Sure Start, thus helping millions of working parents with childcare. It’s not radical, it’s the decent thing! But RADICAL is what she’s trying to steal from Corbyn’s campaign. She wants to re-brand – but late in the day, no? – to grasp some of his support. Obvious.

Liz Kendall is on record as saying “Anyone but Corbyn!” which is, frankly, reprehensible! If that’s the case – as last-place runner – she should drop out, as should one other of Cooper or Burnham, to better consolidate the support and improve the chances, of the non-Corbyn candidate. But she won’t drop out, neither will any of the others, as they’re all careerists and want to win for their own reasons. Obvious.

Burnham is the slimiest of the lot, though. He’s happy to say Corbyn’s POLICIES aren’t credible, but at the same time he’s adopting them all, one by one, in some form or another, in an attempt to pinch some progressively-minded “Corbynistas” for himself. He’s likely to be Corbyn supporters’ 2nd Choice so he doesn’t want to alienate them too much, does he? Sneaky, but obvious.

The fact that all three are on the attack against Corbyn – essentially one of their own – is disgusting. All they’re showing, to me anyway, is that they’re more interested in getting the top job than they are about engaging the public and opposing our cruel government. Not ONCE have I seen them speaking to crowds in the street, or garnering cheers of hope from the rooms of newly-engaged young voters. They only attack Jeremy. All the time. And it’s because they KNOW he’s in with a real chance of winning, they know he’s more popular among the PEOPLE (the voters) than they are. They’re on the run, scared of losing. And so they should be. They’re on the ropes without a punch being thrown their way – a sign of weakness if ever there was one.

Jeremy Corbyn, on the other hand, has not ONCE made a personal or vitriolic attack on ANY member of the Labour party. Not only has he treated his opponents and their supporters with respect and politeness, but he’s been the same with every single MP, every former leader (including an overly-aggressive Blair) and every Labour party heavy-hitter who seem to have forgotten the point of Labour this parliament and have instead turned their opposing voice inward.

Jeremy Corbyn is offering only a message of hope. Of unity. Of decency. He’s attacking the Tories. He’s attacking welfare cuts, aggressive foreign policy, tax avoiders, unfairness, inequality, ideological devastation of public services. But never once his opponents. He’s showing that personal attacks are simply not necessary, if you are able to engage the public in the right way.

And that scares the shit out of Burnham, Cooper, Kendall and every other politician and party member who have a vested interest in maintaining this god-awful status quo the public seem so sick of. If Corbyn wins then expect things to get really ugly for him. But he should stick with it and, I believe, the people will be right behind him, all the way to a 2020 election victory for the Left.