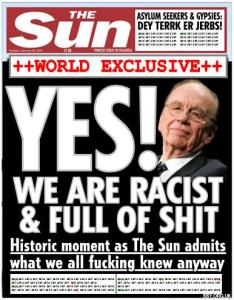 Last night, after seeing the Sun’s disgusting and dangerous “jihadi poll” which claimed that one in five British Muslims were “sympathetic to ISIS” splashed over their front-page, I vowed to write about how coverage like this, in such a twisted and misleading way, was only giving Daesh what they wanted – more division, more mistrust, more hatred. I was going to talk about how the results of the poll were being misreported in an extremely irresponsible way (the original poll made no mention of support for Daesh) and that I was surprised that they were able to go to print with such obvious and provable lies. I planned to offer link after link after link debunking the fabrication, offering facts and figures that prove what a shower of shit the Sun really is, as if further proof were needed.

But I woke this morning feeling sick. Feeling dizzy and aching and generally a bit crap. I have the flu, I suppose. I’m resting on the sofa with a bowl of beans and a cuddly dog. I can’t be arsed with having to once again state the obvious while the blind masses chirp on with bollocks like “have you seen The Sun? They say British Muslims SUPPORT ISIS!” I simply don’t have the energy today. And I’m ashamed of that fact.

Last week, during a conversation about the Paris attacks in which I urged people around me not to be afraid as “that’s what the terrorists want: terror!”, someone walking past yelled at me “Well! I’m scared anyway! You don’t know WHO’S a terrorist!” and I simply sighed and shook my head. I was told by a stranger that “with so many of them [Muslims] around you just don’t know who to trust, do you?”, thrown out with little or no real emotional understanding of the statement’s potential for damage, as though they were saying “That X Factor is going down hill, isn’t it?”. “Terrorism” and “Muslims” have become interchangeable in the minds of many, thanks mainly to the preaching of our government and our media.

Recent studies show that attacks on Muslims in Britain have risen 300% since Paris was hit, which is fucking awful. Yet many people seem okay with this (or at least not all that bothered) because “maybe some of those people are actually terrorists or something?”. Idiots are everywhere and suddenly they’re all experts in foreign affairs and international anti-terror strategy.

A friend of mine told me last week that he had a conversation with some blokes in their mid-50s at his local pub the previous weekend. They were saying that, now that ISIS have “landed in Europe” on the “tide of immigrants” that nowhere was safe anymore. “You can’t even go to the shops without fearing that a Muslim will blow themselves up by the till…” one snapped. My mate, a decent chap, countered this with the fact that less than 0.0007% of Muslims world-wide have any links whatsoever to ISIS…

…For this he was called a “Muslim Sympathiser”. Read that again: A MUSLIM SYMPATHISER, not a Terrorist Sympathiser! I’m one of those Muslim Sympathisers! I sympathise wholly with those who are being lumped in with the animals of Daesh based on their religion, their skin colour or even how they dress (An acquaintance thought an Hasidic Jew was a Muslim last week; the same person once said that she was sick of hearing “Them” talk in “Muslic language” because they could be planning anything – presumably that’s how she thinks terror is planned? Muslims chatting openly about blowing shit up? Idiot!) and abused for it! I’m right beside them, all the way!

But I’m losing faith in even the most decent people I know. Someone I thought was – no, KNOW IS – a thoroughly decent human being (and as attentive as anyone to the culturally and religiously sensitive situation being fostered actively by our media and governments for political means) admitted that even he felt “uncomfortable seeing a woman in a headscarf on the train, because you really don’t know, do you?”  Well I know.

I’m not afraid of terror attacks. The chances of getting caught up in an attack are very slim and, heaven forbid, should it happen to me or my loved ones there would be nothing that anyone in the area could do to prevent it anyway. Being afraid is what Daesh want you to be. They are on record as saying that they WANT division, they WANT a “war” between Muslims and everyone else as then – in their words – “they [Muslims] will have nowhere else to go, but to us”. Governments too want you afraid, because when you’re afraid you’re more likely to back their transparent, bloodthirsty calls for (profitable, oh so profitable) war.

In the last few days, following years of cuts to public services, armed forces, police, NHS staff, following years of hearing about the desperate need for austerity and the tightening of the collective belt, David Cameron has suddenly “found” £12bn to throw at making bombs and missiles to wage war in Syria. Funny how that cash just happens to exist when it’s for killing people but there’s barely a penny available when it’s for saving people’s lives through the NHS or state welfare budget! Almost as though austerity is being PROVEN to be a political choice, not a national necessity.

Terrorists don’t scare me. I speak to Muslims every day! Many are friends of mine! I work beside them, eat with them, laugh and talk about Star Wars with them. I don’t for a second fear them because being Muslim isn’t the same as being a Terrorist! I am not afraid because, to put it childishly, “that’s what they want me to be!” and I refuse. I’ll shop this Christmas, I’ll drink in bars and see movies in the cinema and generally go about my life as normal because I will not let them frighten me into seclusion. You shouldn’t be afraid either!

What I am afraid of, though, is a massive public attack on British Muslims (many born here, as were their parents, their grandparents) fuelled by government scaremongering and irresponsible media reporting, whipping up a storm of “True Britishness” that is happy to expel, attack or abuse anyone it sees as “Not British Enough”. We’re edging quickly but almost imperceptibly towards a country that resembles something from Children Of Men or V For Vendetta! Massive inequality justified by crooked, greedy governments and their bought media as The Only Way thanks to a narrative of mistrust of the Other and an untamed rage among those too stupid or too scared to think for themselves.

And what can we do about it? I’m genuinely losing faith in ever finding an answer to that, or at least an answer that gives hope. I’m ashamed of each and every one of us, and you should be too, because this is happening: Neighbour is turning on neighbour because The Sun told them to, because the Tory government told them to. Many of us don’t buy it for a second. But we should all be doing so much more to restore truth and decency, to counter the lies. Every last one of us. We simply must!