While the whole world is speculating about who will be the next Doctor in BBC’s flagship show Doctor Who, it seems nobody was speculating about the replacement of Kris Marshall’s Humphry Goodman in Death In Paradise. That’s because they’ve already announced his replacement (only read on if you are happy to know who it is). The relationship between the two shows is tenuous at best, but I’d like to look at some things that Doctor Who could learn from the sun-drenched detective show.

Before its very first series aired the BBC publicity machine went into overdrive on what was promised to be an exotic and fun new detective comedy-drama from little-known writer/showrunner Robert Thorogood. The winner of the first Red Planet Prize, where “new” writers were able to pitch ideas to seasoned producers, Thorogood’s Death In Paradise warmed the TV schedules with its light-hearted Jonathan Creek-alike murder mysteries. Ben Miller’s Richard Pool was the hero, Lenora Crichlow’s Lily Thompson his young sidekick, or so it was billed in the run-up to the first episode. In fact, it transpired that Crichlow was the murderer all along and, though set up to be Miller’s Number 2, was sent packing at the end of the episode, with the prime suspect – mysterious Camille Borday, played by Sara Martins – joining as Poole’s second in command.

It took casual viewers by surprise, sure. But it came as an even bigger shock to those who had followed the publicity train in the lead-up to transmission. If Doctor Who were to pull a similar stunt with the introduction of a new Doctor minds would be blown. We’ll likely have a “special” announcement programme some weeks before filming begins, where some presenter will spend 40 minutes chatting to celebs about who they think might be the new Doctor, before revealing the new star of the show to a cheering audience of fans, all shown live on BBC One. But imagine if the first time we ever see the new Doctor is when Capaldi regenerates?! Imagine not knowing who he’ll be turning into until the very moment it happens? That would be insane! 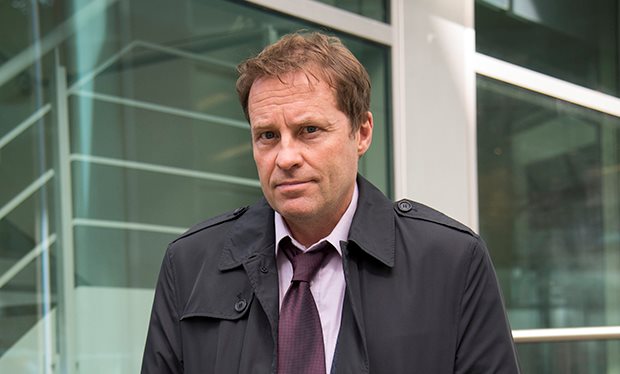 Tonight’s episode of Death In Paradise sees the team travel to UK for the first time in the show’s history. Swapping the sunny glare of Guadalupe for the bright lights of London is a decision the production team will not have taken lightly. We know – thanks to a BBC press release and an interview with Marshall in The S*n “newspaper” – that this will be the last series in which Humph chases killers in tropical climes. We also know that his replacement on the fictional island of Saint Marie will be DI Jack Mooney, played by Ardal O’Hanlon. Fans of the show will be as excited about this change of lead as Doctor Who fans will be about the forthcoming regeneration.

One more interesting thing to note is this: Doctor Who is currently pulling audiences of around 6 million or so viewers. Death In Paradise is drawing a whopping 8.7 million on average. While Doctor Who looks forward to a year off between show-runner Steven Moffat leaving and his successor Chris Chibnall taking over (although, fans won’t be looking forward to that rest at all) Death In Paradise shows no signs of needing a break just yet. Its sixth series continues tonight at 9pm on BBC One with the conclusion of this weeks’ two-parter landing the same time next week. It’s almost time for O’Hanlon to take the lead, heading up the only police force in the world with as many murders on its books as Midsomer.

I’m a massive fan of both Doctor Who and Death In Paradise. I’m excited to know who’ll pilot the TARDIS into the future. I’m exited to see what DI Mooney will be like. Ratings matter, of course. But the most important thing, for me as a viewer, is for both shows to continue thrilling me, as they do now. Despite a few missteps from both over the years, it’s safe to say that me and my wife Aimee will be there when we find out, from both, just what’s to come. We love Death In Paradise (and Doctor Who).