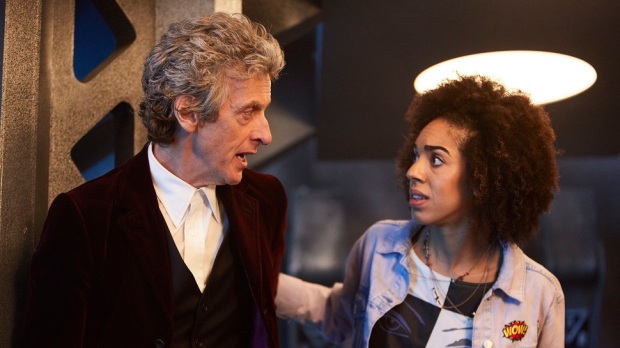 Doctor Who is back with a brand new TARDIS crew. Joining Peter Capaldi for his last series at the helm are Pearl Mackie and Matt Lucas. Both are wonderful; more about them soon. What of the story? Well, it was great! Some years after we last saw him, the Doctor is now lecturing at Bristol University and has been for a long while. He’s taking care of something that’s been locked in a vault below the ground and it isn’t long before trouble finds him.

Bill Potts (Mackie) has been sneaking into the Doctor’s lectures. She isn’t a student, she works in the kitchens, but she has a thirst for knowledge. Her crush, Heather, has a star-shaped defect in her eye and it isn’t long before she has also been killed and replaced by an alien intelligence that looks like a puddle of water, bent on leaving earth. But it won’t leave without Bill, thanks to promises made when Heather was just a sad girl with a star in her eye.

The Pilot is a perfect jumping-on point for new fans of the show and works just as well as a long-awaited reintroduction to our favourite time travelling alien being. It isn’t long before Bill, Nardole (Lucas) and the Doctor are jetting from planet to planet, era to era, trying to outrun the aqueous assailant-in-Heather-form. The plot is small and personal, the threat contained only among the new gang – the world isn’t really in peril, here. And the episode is better for it. We get time to get to know our new companion; Bill Potts is excitable, enthusiastic and unknowledgeable enough to ask the questions we ourselves have. A big noise was made about her being the “first openly-gay, full-time companion” (although there was Captain Jack, of course) but her sexuality isn’t a case of the BBC trying to be “right-on” as an afterthought. There’s no hammering the point, no big deal: She’s a lesbian. She just is. It’s a part of who she is but she’s so much more than that; more than you’d have given Moffat credit for. For someone who is usually less than subtle about his characters’ sexual sides, Bill is beautifully-rounded already. We’ve known her for less than an hour and yet we already know so much about who she is. I can’t wait to get to know her better. She really is wonderful.

As for Nardole, he’s not in it enough to piss us off. And when he is in it, he’s a delight – far less ridiculous than his first appearance and full of entertaining lines to make us chuckle. Of all the characters I thought I’d hate to see return I’m actually glad he’s back – I love a full TARDIS.

But what of the future? Emojibots next week, the one I think we’ve all been least looking forward to. But with Mondasian Cybermen ahead and the promise of the return of John Simm as the Master, I’m sure we are in for a treat! It’ll be sad to say goodbye to Peter Capaldi, a truly wonderful incarnation of everyone’s hero of choice, but I trust the new team to get the right person in to replace him. Talking of which, The S*n are reporting that Death In Paradise star Kris Marshall has already begun the transition and is, in fact, the one chosen to be the next Doctor. Whether this is true or not remains to be seen, obviously, but they were spot on about John Simm’s return. I’d welcome that casting, personally.

And then there’s the Big Question being asked by those who take the time to look a little closer, to speculate a little harder, than most. Is this Earth? Is Bill from our planet at all? Sure, she appears to be in Bristol but the Cybermen shown in the Coming Soon trailer are the very first iteration, Mark I Cybermen, if you like, and they come from Mondas, a planet from our own Solar System that was lost to battle aeons ago. Could all this be happening long ago on Monday, the now-lost and far-advanced sister planet to our own? I’ll be exploring or exploding this theory in the future based on clues (or lack thereof) in future episodes.

What I’m overjoyed to report, however, is that I loved every second of The Pilot and am thrilled with our new companion. It’s great to have Doctor Who back on our screens after such a long absence, one that has numbed us all – I think – to the joys of the show, so much so that many people seemed to have lost their enthusiasm for it in recent months. I hope The Pilot did enough to rekindle the love people have for this show. It deserves to be loved. I’ll always love it, no matter what.